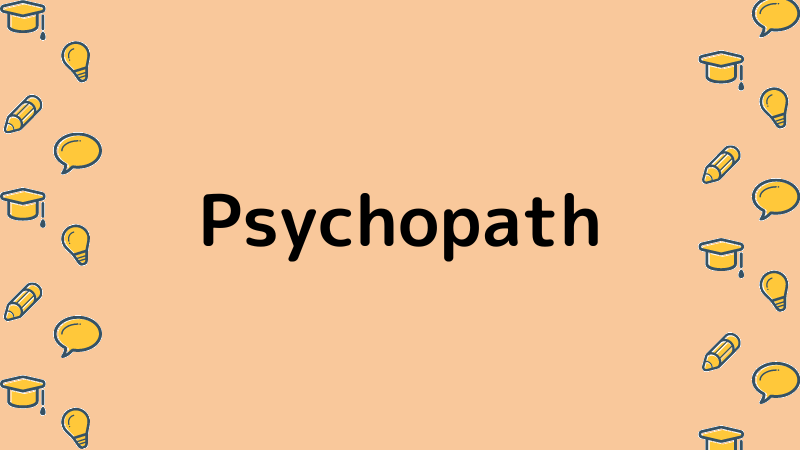 Not all psychopaths are vicious criminals.

Nor do psychopaths necessarily commit crimes.

But there is a possibility that you also have been successfully taken advantage of by a psychopath.

And before you know it, you may have fallen into their traps.

It is necessary to have some knowledge about psychopaths to avoid such danger.

A Few Percent of Humanity May Be Psychopaths

A psychopath is a person as follows:

“A person who is born lacking in conscience.”

However, the cause of becoming a psychopath is not only genetic.

There are cases where a person becomes a psychopath because of the family environment during childhood.

(Some people argue that if a person becomes a psychopath due to acquired factors, they should be called a sociopath.)

What is your impression of psychopaths?

Either way, you would imagine violent criminals.

However, not all actual psychopaths are such ones.

On the contrary, there are many psychopaths who, at least on the surface, lead quiet lives.

It is just that we are not aware of the psychopaths around us.

Statistics show that at least 1% to several percent of all human beings are psychopaths.

Surprisingly, psychopaths seem to be everywhere.

Perhaps your friend is a psychopath.

Maybe you are a psychopath, and you merely don’t know it.

Not Only No Conscience, Not Even Fear

It is hard to diagnose whether or not someone is a psychopath.

Indeed, there are checklists to determine it, but psychopaths are not as simple as such paper tests can reveal.

So this article will explain them.

First, as noted earlier, psychopaths have no conscience.

So even when they do bad things, they have no sense of it.

In other words, they feel no remorse.

(That doesn’t mean they are the thinking type in the typology.)

At first glance, they may appear pleasant and friendly, but you often notice their coldness after meeting them a few times.

While these are two characteristics of the “average psychopath,” there is a factor that can turn a psychopath into a criminal.

It is as follows.

They have no fear.

We generally don’t want to do bad things.

Because we are afraid of being scolded, blamed, or hated by others.

And we don’t want to break the law.

We are hesitant to break the law because we are afraid of being arrested and going to jail.

Not only that, we are afraid of losing credibility or friends.

Psychopaths, however, generally have no such fear.

Thus, as far as psychopaths are concerned, the death penalty does not deter crime.

Many Psychopaths Seem Honest and Even Attractive

Many psychopaths in prison become honest and obedient prisoners.

They become model prisoners and are paroled in a relatively short while.

In fact, this “appearance of honesty” is the tricky thing about psychopaths.

At first glance, they appear to be honest and have common sense.

That is why they appear to be trustworthy.

Another characteristic of psychopaths is that they are good at gaining others’ trust and have a talent for deception.

Moreover, they have charming smiles and don’t look like bad people.

(But not necessarily handsome men or beautiful women)

As you have probably already noticed, many psychopaths are gifted con artists.

By the way, there is a gender difference in the population of psychopaths, apparently more men than women.

Many women see psychopathic men as “a knight on a white horse” who is sincere, attractive, and who will make them happy.

Thus, women fall prey to psychopaths one after another.

Of course, women are not the only targets of psychopaths.

Men, who are less cautious about others, are also easy victims of psychopaths.

By nature, psychopaths seem to have little interest in human emotions.

However, for some reason, they are geniuses at reading others’ feelings.

Besides, they are good at getting others to trust them.

Moreover, many psychopaths have high IQs.

And they have excellent work skills.

That is why they are promoted quickly in the company.

Therefore, there are many psychopaths in high social positions.

It is said that many psychopaths are also company executives.

In fact, it is impossible to run a company if you “truly care” about each and every employee.

A company manager cannot run a company if they cannot fire useless employees as if throwing away trash.

Also, there are many psychopaths among doctors, dentists, competent lawyers, judges, and, let us not forget, politicians.

This is because these professions must be emotionally detached, which makes those jobs suitable for psychopaths.

However, in such cases, they are not psychopaths as vicious criminals.

They are “relatively safe psychopaths” who work within the confines of the law.

Most Psychopaths Have the Face of a Good Guy

You probably think psychopaths are irrelevant to you.

But there are probably more psychopaths around you than you think.

If you think that about 1-3% of the population of your country are psychopaths, you will realize how many there are.

Of course, not all of them will become criminals.

But if you are not a psychopath, you should know psychopaths will always be around you.

Again, psychopaths appear to be honest and good citizens.

In fact, psychopaths are often people for whom even the word “psychopath” doesn’t come to mind.

Therefore, if you find someone near you who you feel is a nice person, you should, on the contrary, observe that person calmly.

Why Do Old Bad Memories Come Back in Hard Times?